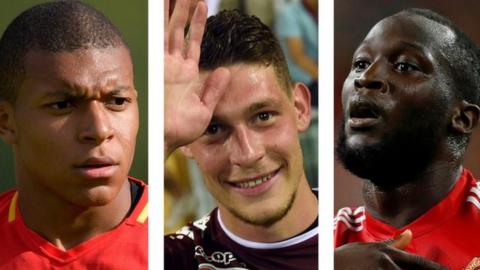 The talent of players such as Kylian Mbappe, Andrea Belotti, and Romelu Lukaku is without question, but how certain can we be about their development?Will a £300,000-a-week salary change a hot prospect’s attitude to the game?

Will that promising full-back relish being thrown deeper into the public spotlight?

What if the £200m superstar doesn’t settle in Paris?

These are the types of questions being asked by clubs as they consider investing eye-watering sums on new players.

An emerging field of analysts and experts believe they have the answers.

But how do they find them?

Last season, Burnley striker Andre Gray apologised and asked “for forgiveness” after homophobic tweets he sent in 2012 were shared.

And, just last week, Chelsea forward Kenedy was sent home from their pre-season tour of China after being accused of xenophobia and racism. He apologised for the Instagram posts.

But what can a club learn from a player’s social media presence?

Ben Wright is head of sport at communications agency Cicero, which produces reports on players for clients across the globe, including seven in the Premier League and two in Spain’s La Liga.

He says: “We look all the way through a player’s online presence. By doing this you can get an idea of what kind of person they are and how their character has evolved over time.

“We analyse media coverage, social media, fans’ forums, everything that is available online, across 13 languages, to build up a public picture of their life.

“Are they using social media late at night? Do they blur the boundaries of public and private? How have they changed over time as they have begun to earn more money?

“Are they posting the kind of insight into their private lives that fans really appreciate, or is it all about new cars and new clothes? And are they posting this kind of stuff regardless of whether it’s been a good or bad result the weekend before?”

Some clubs have developed in-house teams – sometimes within their scouting departments – to perform similar research.

But in January, Cicero produced a report on a promising young Premier League player, who will remain anonymous.

The analysis uncovered a series of social media posts, dating back several years, that were sexually explicit in nature, and found angry responses to opposition fans that included offensive language.

Ultimately, the client who commissioned the report decided not to offer the player what would have been a significant development in his career.

Torino striker Andrea Belotti has been linked with a move to the Premier League for much of the summer.

In July, Cicero was asked to produce a report on the £90m-rated Italian, and the findings were largely positive.

One section in the report – written for a Premier League club – analyses the “tone and approach” of his social media activity, while another addresses the ‘”likelihood of future issues”.

Belotti’s posts, which featured regular tributes to his wife and family, displayed “no instances of bad language, prejudice or public disagreements”, the report said.

“It is extremely unlikely he would ever post something or engage with fans on social media in a way that brings himself or his club into disrepute,” it added.

But, in a section titled “social media presence”, it says there would – at this stage – be a slim chance of a club harnessing his online following to counter-balance a hefty transfer fee.

Belotti’s 30,000-plus followers were, the report said, heavily Turin-based; his appeal is markedly different to the global reach of, for example, Manchester United midfielder Paul Pogba.

Perhaps that outweighed his good behaviour? Belotti, 23, remains in Serie A, where he scored 23 goals last season.

What’s in the Belotti report?

Despite the benefits to be gained from monitoring it, social media can give players an outlet to project themselves as something they are not.

That becomes harder when they cross the white line on match day.

Geir Jordet, professor in sport psychology at the Norwegian School of Sport Sciences, works with several top clubs across Europe – including in the UK.

“The best way to learn about about the psychology of a player is to observe what he does on the pitch,” he says.

Jordet has devised a model of 11 attributes that can be used to judge whether a player will succeed, or can be helped to succeed, at the very highest levels.

Among the things he advises clubs to do are watch a player immediately after they make a mistake, see how they communicate with team-mates and assess to what extent the player is proactively involved in the game.

“I have built up a research portfolio on observing players’ body language in matches, and I help clubs to see that,” he says.

Jordet says clubs must also ensure any new player must fit in with the “coaching culture”.

“The heavy training culture at one club, for example, might be a very powerful part of their recipe for success, and they might be especially keen to sign a player who fits into that – someone like Romelu Lukaku, for example.

“But there might be other clubs who would be willing to take more of a risk on a player who does not seem to be as dedicated, because they are good at dealing with so-called problem players, those who might be easily distracted by life off the pitch.”

Why does it matter?

To put it simply – everyone is different. Two individually brilliant footballers may not play well together.

“The scouting departments, even at many of the Championship clubs, are full of people, full of TV screens, they have the most expensive software available, staff travelling constantly around the world. It is an extensive system, backed by a lot of money.

“Footballers are very highly paid employees, but for some reason we still think everyone should be treated in the same way. That is the same as saying: ‘OK, it is physical training today, everyone runs five miles together.’

“You can see the proof every year. When a brilliant player goes for a lot of money somewhere, and does not do well, the player is blamed, the coach is blamed.

“Then, when the player goes away to another environment and becomes a star, everyone says ‘oh it was too early for him’, when there will be many other factors why it didn’t work out, completely linked to his personality; the way he functions in a group, or the other people in a group.”

Will it always be ‘a game of risk’?

So where does this fit in with the traditional methods used by scouts?

Tor-Kristian Karlsen is now an ‘independent advisor’ to clubs but he used to work as a scout across Europe. He believes that the “expertise of psychologists is a useful addition to the scouting process”.

However, he also makes the point that the traditional role of scout – if done well – has always involved “studying players in a social context”.

This could include observing behaviour in training, a player’s standing within the group dynamic in social situations, such as at a team hotel, or their reaction to the media.

He says: “In our environment, you have seen so much of a player before you sign him – in training, in matches, interviews – and you have spoken to people that you trust, like previous coaches and other people in the football world. Usually the total of all that information is deemed to be sufficient to make a call on a player.

“If you look at a player like Kylian Mbappe, you know that he has come through the French elite national academy at Clairefontaine, then the Monaco academy, so already you know he has gone through an excellent school with really high standards. That would make you comfortable about signing him.

“Football always involves an element of risk. I don’t think even the most skilled psychologist in the world could project with great accuracy where a player is going to end up. But of course it makes sense to involve such professionals, and there are clues to be found in his behaviour on the pitch, in his reputation, in his development.”

Focus on personality as a “new trend”.

And while former Tottenham and Liverpool director Damien Comolli says clubs have “always checked players’ backgrounds extensively” he acknowledges the game is changing.

He says people are beginning to “look more at the individual as a human being before as a football player”, a trend he describes as “one of the main current topics in recruitment”.

“High-level sport is so demanding,” he adds. “If we get the wrong individual in on day one, that can destroy everything the club is trying to achieve.

“When I was at Tottenham we were thinking about a massive investment on a striker who was playing abroad. I travelled to meet him, and in our conversation I asked him why he would like to join Tottenham.

“His reply was: ‘Well, I would like to live in London, because there I can have a quiet life with my girlfriend without everyone recognising me in the street.’

“This is what clubs are trying to understand before they sign players, and now I think everyone is pretty much talking about the same thing: getting the right person in as well as the right player.

“It is a trend that is not going to stop evolving, and we are only at the beginning.”